Barbara Algie gets in festive mood!

Why in the Southern Hemisphere do we consider it’s not enough to celebrate Christmas once a year and deem it fashionable to have another one in mid-June when, admittedly, lower temperatures tickle the taste buds for food, lots of food, and all that goes with it?   Once the magic word ‘Christmas’ is out,  sufferers of Writers Block rush to find recipes by Mrs Beaton, Aunt Daisy, or one of the new, modern authors setting out  57 ways to stuff a turkey, whilst regretting not having written the damned cookery book themselves.   Every week book launches are taking place in this genre emphasising its extraordinary ongoing popularity.    So, why didn’t we think of that?   We could have called ours ‘Cooks Tips with Cooks Nips’, ‘The Hungry Writers Handbook’ or even ‘Handy Hints – How to train Hopeless House Husbands’ (the latter being the ‘in thing’ with its titillatingly long title).   Ah well - it costs nothing to dream.   Back to writing ...  Back too to the festive season.   Not that silly non-event in the middle of the year but the one which is still about a month away – although one would think, by its sudden appearance in the shops, it is tomorrow.   Stroll down to your local town centre, you’ll find the telegraph poles are festooned with sparkling garlands.   Fir tree have sprouted overnight into forests in the Shopping Malls and we’re being brainwashed into buying early to ‘avoid the rush’.   Greetings cards are suddenly half price as an incentive to put you in the mood.   Which brings me to think about Santa.   I wonder what qualifications a new-age Santa ought to possess?   His knowledge of formerly acceptable presents, once quite straightforward, may fall well short of the mark with today’s high-tech-minded children.   And Santa himself - who was once so jovially old-fashioned, rotund and with an unbelievable cottonwool beard - wouldn’t fool the keen eyes of any smart 4 year old so how, I wonder,  will he look this year? 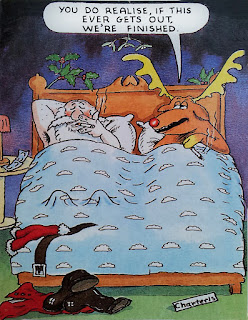 T’was the Night Before Christmas and all through the house
everybody was partying, even the mouse
The stockings that should have been hung by the fire
were on shapely legs for all to admire
Grandma did the Can-can but baulked at the splits
Grandpa told the fairies he loved them to bits
Sylvester the cat was dancing the Twist
with Nippy the Dachshund who looked a bit pissed
With his reindeer in ‘drag’ Santa turned out the lights
took out his whip – pulled on black fishnet tights
‘Get your A’s into G, we’ve a long way to go
Merry Christmas to all and to all HO HO HO!’

Posted by Officer in Charge at 07:00 No comments: Links to this post

Jean Allen on the delights of real books

Having a discussion time with other authors is an excellent way to boost energy and to keep up with changes in our modern writing world. Recently our group's discussion time included ‘the drop in demand for books’. (‘Books’ meaning the old, solid type of book, with pages the reader can turn.)
Today, business systems are in constant change – the selling and buying of books being but one aspect. Pure ‘Book Shops’ are rare now, most having reduced their book numbers and increased their stocks to include greeting cards, stationery, knickknacks, gifts and art supplies under the same roof. The cheapness of online bookstores, such as Amazon and The Book Depository, have reduced the sales of traditional books while television and the internet are vying for custom. In the late 1800s and the first half of the 20th century (before the advent of the microchip) we did not have such options.


This came home to me while browsing our home bookshelves last week.  I picked out a very old book of my father’s; a much used copy of Westward Ho, and felt myself whisked back one hundred years to a time when the famous Charles Kingsley wrote of action, adventure, love and solitude. My father would have been 16 years old in 1914. “I enjoyed that book,” he told me several times. “Read it often.” A hard working lad; he had written his name and his town in cursive letters in pen and ink. Books were treasures in his world.


On that same shelf stand six books I have kept since my sixteenth year. The largest and most worn book is The Complete Works of William Shakespeare; a favourite book which I won in a writing competition in 1952. At sixteen, living our own generation, neither of us would have had the money to buy books. Books were few and highly prized. Both my father and I were avid readers and used the library to feed our love of reading. ‘Westward Ho' meant something special in my father’s world while Shakespeare opened a new world for me.


Progress, in my opinion, is ever a two-edged sword. I used to believe that time brings a balance to new inventions and ‘advancements’. Now I’m not so sure. In the cold world of supply and demand it’s ever ‘short supply - high price: over supply - low price’. Yet I can’t help but dream the magic of the paper book will win out … perhaps in the next generation? What do you think?


© Jean ‘Angel’ Allen, in reminiscent mood, mid-November 2015
Posted by Officer in Charge at 07:00 No comments: Links to this post

How and Why do you choose a book? Vicky Adin wants to know!

Dear Reader – Please, tell me HOW?


How do you choose a book to read? Carefully or on impulse?
Research has told us the majority of books are read because a friend has recommended the story. But what if that friend reads a different genre and style?


I once recommended a book to a friend who liked modern, down-to-earth crime stories with realistic characters and plots, whereas the story I’d recommended was set in the past, used lyrical language, had a bunch of dotty characters and a plot line any amateur private eye would have walked through. I enjoyed it mostly because of the setting and the language: she hated it. The books were a bit like comparing Agatha Christie with Dan Brown.


So, I’d like you to rank the reasons you would choose a book – other than it had been recommended by someone you know.


Reason 1:
So, first up the book itself. Why do you choose a book?
In which order do you rank the following choices?

Now, where would you buy it? Do you prefer print or e-books?


And how did you know about the book?


Please type the Reason Number and the 1-5 of your ranking in the comments below.


Vicky Adin
Posted by Officer in Charge at 07:00 2 comments: Links to this post

Jenny Harrison on the benefits of Writing Groups

A few years ago I attended a Book Festival and I was behind the counter of the Mairangi Writers’ Group stall when a woman came up to me. She appeared slightly nervous but not as nervous as the man standing some way behind her.
“My husband has written a book,” she said. “He would like to get it published.”
“That’s marvellous,” I gushed. “Would he like me to…”
“Oh no, he doesn’t want anyone to read it.”
“I beg your pardon?”
“No, he wants it published but won’t let anyone read it.”
Top marks if you can see the problem here.
The gentleman hadn’t joined a writing group or had a beta-reader look at it or even sent it to an editor. But he wanted it published. Now, is that deep humility, fear of criticism or total arrogance? Perhaps the gentleman thought I was far too much of a pleb to read his masterpiece.
There are hundreds, no, make that thousands, of us who want to write, or dream that one day we will or even are in the process of writing. And why do we do it?
Because we want to share. We have a story or an idea, or perhaps a moral we want to re-enforce. We may be an expert at something and have a wonderful idea for a “how-to…” book (check out Bev Robitai’s  The Reassuring Guide to Self Publishing). But the basic desire is to share what we have with others.
I have been exceptionally blessed by being in a vibrant, colourful and trustworthy group, the Mairangi Writers’ Group in Auckland, New Zealand. We each have a different style of writing and we write on different subjects. All of us want to share our story with other people and the group has about forty titles to its name. Now, that’s what I call sharing! Does this group follow the old adage – write what you know? No! They don’t, but they write what they love and that shows in every book that is published by someone in our group.
Evan Andrew writes historical fiction and his love of historical research shines through every book. I particularly like The Spanish Woman, a story that came from the diaries of Lady Mary Wortley Montagu, who was intrigued by a Spanish noblewoman in the court of the Pasha. Evan loves research and it shows.
Vicky Adin is likewise entranced with history. She started off writing about her husband’s ancestor, Daniel Adin, in her book Daniel. Further books all demonstrate her sure grasp of history and family.
Bev Robitai has a great love of theatre and her two murder/mystery books, Body on the Stage and Murder in the Second Row, are gripping and filled with theatrical jargon and expertise.
I have had to resort to creating a mystical village, Panui, as the background to my books. I think that as an immigrant I have difficulty placing myself solidly into the Kiwi psyche so I have had to ‘invent' it. My two silly scallywags, Rusty Naills and his brother Slasher, live in Panui and I would hesitate to say they are typical Kiwis. I might get deported! Read them in Rusty and Slasher’s Guide to Crime and Rusty and Slasher and the Circus from Hell and let me know if they’re typically Kiwi!
I love crime novels, not too gory, and I think it’s about time I wrote one. Once written, may I share it with you?
Jenny Harrison
Posted by Officer in Charge at 07:00 No comments: Links to this post