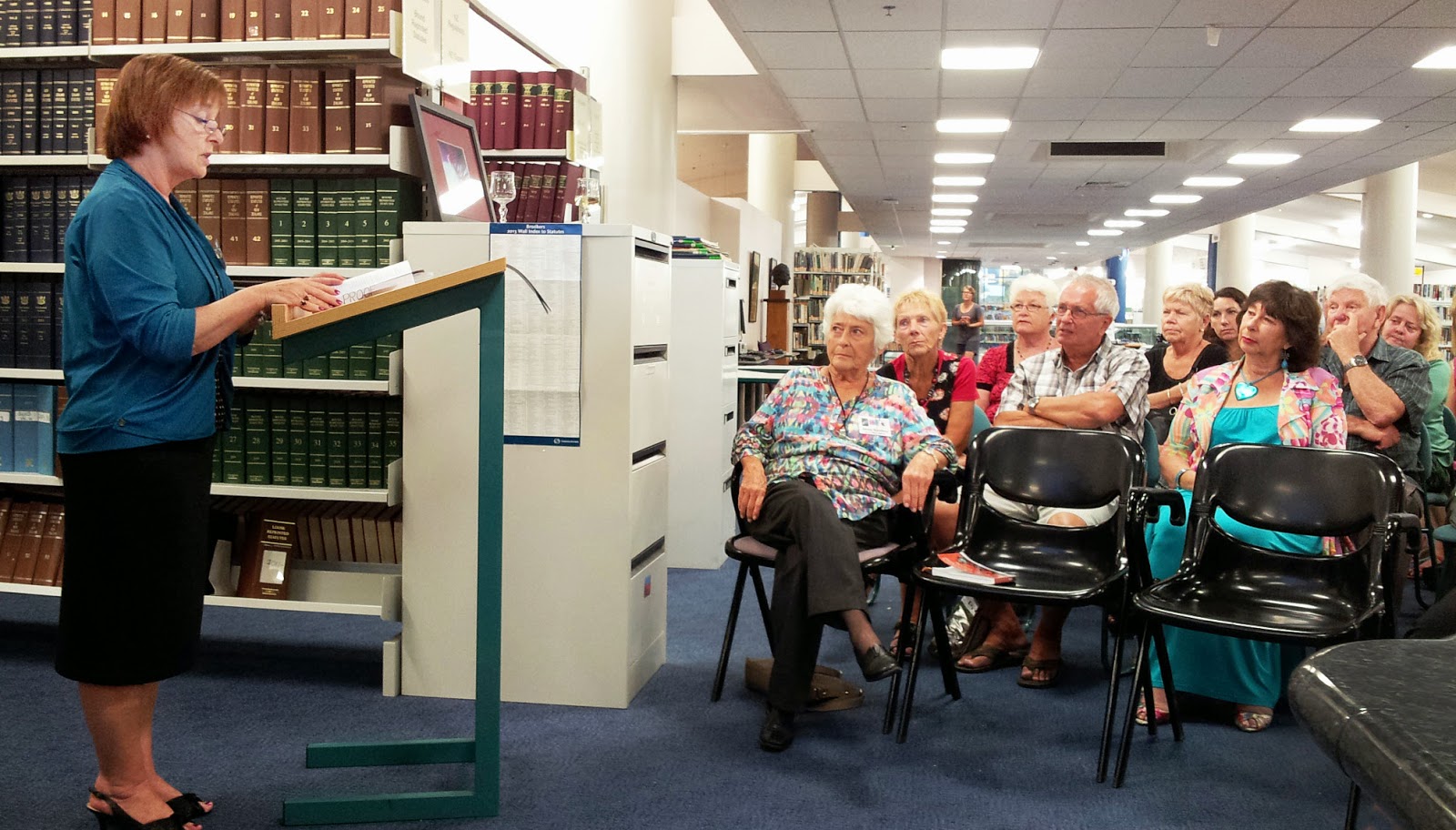 Well, we're almost at the end of March and there's only one writer event left on our public speaking calendar up in Helensville on Wed 9th April. (At the library, 10.30 - 11.30am.)

It has been a very interesting exercise. We've had a variety of turnouts to our events and trialled a range of locations and time slots for  reaching our audience - but the great thing is that however many attendees we've had, their response has always been positive, supportive, and interested, and we have made many useful new connections and allies.

Some of the pillars of the literary community are taking us more seriously now! We're here, we're growing, and we're doing good work.

Of course there is always more to be done to fly the flag of local publishing, and we'll be getting right on to that in time, but I'm sure others in the Mairangi Group will share my quiet feeling of relief that March is over, and now we can get back to writing.

I can't wait to get back to my story and see what happens next!


Posted by Officer in Charge at 11:10 No comments: Links to this post 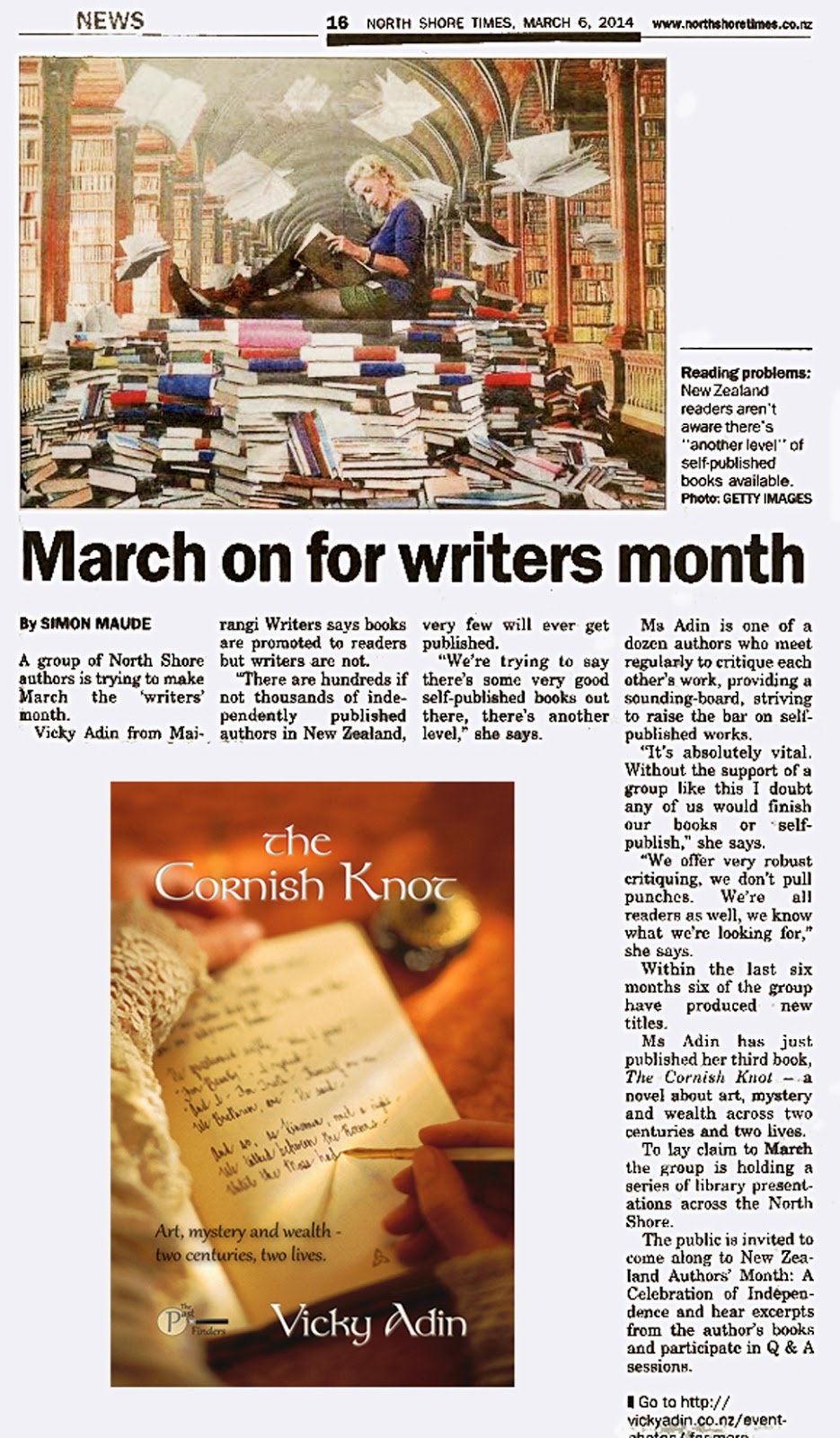 There are still a couple of public events for March when Mairangi Writers are flying the flag for local publishing. Friday 21st at Orewa Library, 10.30am, and the main event at Takapuna Library on Monday 24th March from 6pm. Bring all your questions about writing and publishing and we'll have answers for you!
Posted by Officer in Charge at 18:39 No comments: Links to this post

Inevitably with the passing of someone who has been a part of one’s life for over fifty years childhood memories are resurrected which for me incur a sense of longing for those days of long ago.
On Tuesday 11 March I attended the funeral at St Andrew’s First Presbyterian Church in Symonds St of a very old friend. His name was Les Andrews QSM and he was aged 96. Who was Les Andrews, you might ask? Well, if you were living in Auckland during the 60’s through to the 90’s you couldn’t help but recognise the name. Les was one of New Zealand’s oldest entertainers - an entertainer extraordinaire – the actor and singer from Timaru to the Palladium, a man of incredible talent. During his long life he did it all - firstly with the famous Kiwi Concert Party during the war, then afterwards graduating from the Royal College of Music in London.  As a principal soloist he performed all around Britain as well as broadcasting with the BBC, a quizmaster and interviewer, comedian, pioneer of the early days in television (in both Britain and New Zealand), entrepreneur, and tireless worker for charity. He was an extremely gifted man and over his long and varied life (over sixty years as a performer) gave pleasure to millions.


He battled long and hard to save Auckland’s beautiful old Customhouse which earned him the Queens Service Medal and who could forget Les singing “Click Goes The Toll Gate, click, click, click…” when the Auckland Harbour Bridge was opened – a record which would go on to sell thousands of copies.


When I was thirteen I moved to Glendowie with my family and one morning while waiting for the bus to take me to my new school in the city I met Jenny Andrews who was going to the same school. We immediately hit it off and later I met her talented musical family – her mother Marie Campbell, contralto and music teacher, her two brothers, David and Robert who played the flute and the clarinet, and Jenny herself, a gifted soprano.


There followed many years of fun and laughter throughout our teenage years – so many memories - going backstage to watch Les performing, the TV studios in Shortland Street when, in the sixth form, we tried out for one of Les’s quiz shows (it never got to first base!), Jenny and I singing songs from The Sound of Music and My Fair Lady to Les’s praise, Christmas holidays in Gisborne where I would meet many performing artistes, Les giving me away when I got married, and later after Jenny’s mother died and he married Sonia King attending their many variety concerts in Auckland’s Town Hall and Aotea Centre. Les and Sonia brought the house down with The White Cliffs of Dover at one of my book launches. One final memory of Les and Sonia at my house-warming in Takapuna and the two of them sliding out the door at on a sea of wine! How they made it home in one piece is one of life’s great mysteries.


As Jenny said in her eulogy: “Well Dad, this is your final show. The venue is sorted, the tickets sold, the programmes printed, the seats are full.” And what a show it was - a great and talented cast of many from all walks of life, tributes pouring in for a remarkable man who had led a rich and rewarding life. And the music, a beautiful and fitting reminder of a man who had an ability to enchant with his singing.


It was a send-off to remember.

Posted by Officer in Charge at 14:15 No comments: Links to this post

Bev Robitai on focusing your aim as a writer.

If you’re looking for competent, sensible, successful writers to follow for inspiration and advice, you could take a look at Joanna Penn. One of her latest blog posts has advice that is worth revisiting several times in your career as your aspirations and skills change. Here’s the link http://www.thecreativepenn.com/2014/03/01/definition-of-success/


Her basic premise is that you need to decide what you want to achieve with your writing. Fame? Fortune? Literary prizes? Or simply the satisfaction of holding a book in your hand (in print or on an ereader.) It shouldn’t change HOW you produce the work – you’ll always want to make it the best it can be and produce it to the highest standards, but it may help you decide how much work you’re prepared to do to promote it.


If you want to get your book on shop shelves, are you willing to spend time trying to find bookstores to stock it? If your definition of success is to be in a major book chain it will take considerable effort and resources. Even getting into indie bookstores is an uphill battle at times. If that’s not for you, you might prefer promoting your ebook online. Can you face contacting reviewers, listing it on Goodreads, doing promotions and giveaways? It takes a fair bit of time and effort to achieve that miraculous overnight rocket to stardom! If you seek literary prizes, will you hunt out competitions and pay the entry fees?


I like Joanne’s last points – you can seek to make a liveable income from your writing, and you can aim to leave a body of work that you’re proud of. The two are not mutually exclusive but you’ll need to have a clear idea of what’s important to you to achieve success in either.

Bev Robitai
Posted by Officer in Charge at 15:13 No comments: Links to this post

Mary Elsmore-Neilson on a Poetry Workshop

At the January Waiheke Poetry Workshop, amidst native bush, gentle rays of sun plus a thunderstorm, (I thought we, our island might float, be blown away) flustered bulky woodpigeons flapping about and bossy, warbling tuis, our creative juices were stoked then flowed. Each morning, us four participants, had to select a verb and a noun from the Mind Gym cup of words and write furiously for five minutes to warm-up.


We stretched our writing muscles just as we would stretch before exercise. Over the week we explored five of the, at least, 21 senses: visual, gustatory, tactile, auditory and olfactory to create sense-mixing imagery.


We discovered the power of what is not there, ie: how metaphors 'speak' to the reader of a mood, allowing the words to direct the reader's understanding of the words as with Kate Farrell's, (American, b.1946)

'The Double Bubble of Infinity'


The night before the day of our wedding


I dreamed that the universe had a party,


All the stars were invited,


Beneath sparkling chandeliers, the planets

In all its beautiful candle-lit galaxies,


The Cosmos was Laughing with

We saw that Capital letters can add extra meaning, learnt not to use BOMB words which tend to do that to a piece if not appropriate, how motion and active vision can encapsulate the energy/movement of an extraordinary moment whereas words like snow promote a stillness, a freezing static; plus the importance of a good ending, as in Ted Hughes, 'Roe-Deer' (possibly written in the 1960s.)


I liked Seamus Heaney's comment from 'HOMAGE TO ROBERT FROST,
Frost believed...that individual venture and vision arose as a creative defense against emptiness...'


Some remarkable poetry was produced as we worked together to deadlines, each of us having a very different style. On the last day we performed to invited guests, along with the other Print and Sculpture Workshop participants. A nice conclusion to our workshop week.


This past Tuesday I was invited to read as part of six writers, which included the inspirational Jacqueline Fahey, at Takapuna Library. It was a part of Anita Arlove's award-winning 'Spit It Out' which premiered in the 2013 Fringe Festival. I chose my 'Soliloquy,' written for a 2012 NZSA monthly competition, which tends to make people laugh with its purplish and lively language and my new 'Master Chef' written during the above workshop. As a Grand Wrapper, A Baby Boomer, I performed this ironic poem about love, as a rapper; a Performance Poet, which was marvelous fun.


There will be two more Spit It Out events, all well worth attending. Go to www.spit.it.out for more details.


The poetry workshop, an annual event, was excellent. It was great to just 'hang' around with words and play. I do recommend the event and now there is a possibility that our poems will be published by the Waiheke News.

Posted by Officer in Charge at 22:01 No comments: Links to this post